#1 Dating Tip: Get an Accountability Partner 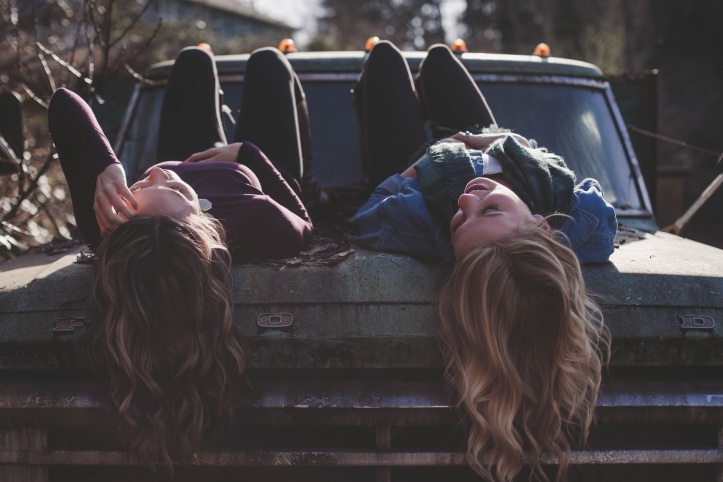 If there’s one thing you should do when dating, it’s to find an accountability partner (of the same gender). What I mean by this is:

I honestly don’t know where I’d be without my accountability partner, Christina.

Christina and I couldn’t be more different from the outside. She grew up Amish, with a donkey as her best friend; I grew up near the city, hopping on subways to meet my dad for lunch. I introduced Chrissy to Starbucks Frappuccinos; she taught me how to can a jar of fresh peaches.

Still, God drew us together. We had been in the same choir in college, and I had a very special memory with her, a reading day during finals when she and I walked down to a local creek, spent the afternoon talking, and then came back to her room to listen to David Bailey, a Christian artist we both loved. And before I left, she gifted me with canned fruits and veggies, which I lugged back to my dorm room. (Were they safe to eat, I wondered? Remember, I was city folk. Cans came from Shop ‘n Save.) So that was the extent of it—I left my Pennsylvania college town, and Chrissy and I went on to live our own lives. So when I moved back to said tiny college town years later to teach, I didn’t know she was still living there until we bumped into each other at a flea market one Saturday morning. But when she started telling me about the sci-fi novels she was reading as I picked up salt-and-pepper shakers, I tuned out. I didn’t read that stuff, didn’t think Chrissy and I had anything in common. It wasn’t until a few months later when David Bailey came back to town that I called her.

We ended up talking for hours after the concert, both blurting out that we had been praying for a friend. We became inseparable; she was a mom of two, soon to be three, so I would often go over to her house to hang while she did all the amazing things a former Amish-bred girl does, like bake the most amazing bread and can the most delicious jams and fruits and veggies. And as we got to know each other, we realized we had much in common—of course, we were both Christian, but we were also writers, and we began to share our pieces with each other.

Flash-forward to my move states away to North Carolina and God knowing what He was doing.

I had been thinking for a while that having an accountability partner would be a smart move as I ventured back onto the path of my faith and healthy dating. One night as I started talking to Chrissy over the phone about my boy stuff, she started talking about her life, what she was going through at work particularly. Strangely, we saw parallels. And that is how it came to be that Chrissy became my prayer and accountability partner.

Each time we shared what was going on in our lives, we found parallels. We thought it neat, and thought perhaps God had a purpose for drawing us closer. Neither of us were big phone people, but we found ourselves calling each other at least once a week to share our weeks and to pray. We ended each conversation in prayer. It empowered us. Then, one day, a slip of paper fell out of an old journal. It was a reference to the book of Nehemiah. I read the slip of paper to Chrissy, and it resonated with her too. So we started reading the book of Nehemiah, finding practical applications in both our lives, and sharing those each week. God was in the center of our relationship, and it thrived!

But what was so beneficial and such a gift to me in Christina was her listening ear and how—instead of judgment—she always pointed me back toward Jesus.

She prayed for me; we prayed together. I knew I could call Chrissy when I was having a moment of temptation or was afraid I was falling back into old habits. One time, she prayed for me while I made a difficult phone call to a guy I liked but who was not good for me. She said she was going to pray until I made that phone call and then called her back. Well, I didn’t want to make my poor friend pray for a gazillion years, so I made the difficult phone call, broke it off with the unhealthy guy, and then called her back, her prayers and support a strength.

While one might think this girl who grew up on an Amish farm and was married to a solid Christian man would judge a city-bred girl going on multiple dates who had a messy past, she didn’t. She herself wasn’t perfect, and maybe it was the writer in us, or maybe it was God, but we found connection to each other’s struggles. Neither of us was better than the other. I think, too, the fact that Chrissy was in a healthy God-centered marriage made her a great accountability partner—that’s what I ultimately wanted, right? Chrissy shared wisdom and real-life stories, and her husband was even praying for me on the sidelines!

And I always knew that if I got into a rough, tight place—whether of temptation, whether I blew it (again!)—I could come to my friend to confess my struggle or sin, and she would listen and pray with me to get back up and try again.

And what is totally awesome, too, about having an accountability partner is that not only can they help you stay on track, they can also remind you of how far you’ve come: your GROWTH. Chrissy has been with me from the beginning, through all the heartache and struggles, and when I need it, she will remind me of how I’ve grown and cheer me on. We all need someone like that!

Question: Is there someone in your life like my Christina? Someone you can pray with and be honest with as you go through this journey of dating and growth? Remember, sometimes the people who understand you the most will be the ones you never would have guessed. Ask God to lead you to the right person to pray you through this journey.

Note: Be careful to not take your accountability partner for granted. And you don’t have to have just one. Having a couple people you trust in your corner is awesome! But if you have just one person you feel you can trust, remember to try to go to God first. One person was not meant to shoulder all the burdens of another.

God is our ultimate safe place, but having someone or a few persons as his hands and feet makes a world of difference and will strengthen you in a way you never thought possible.