Pressing into the Center – Sometimes God Speaks in a Still, Small Voice 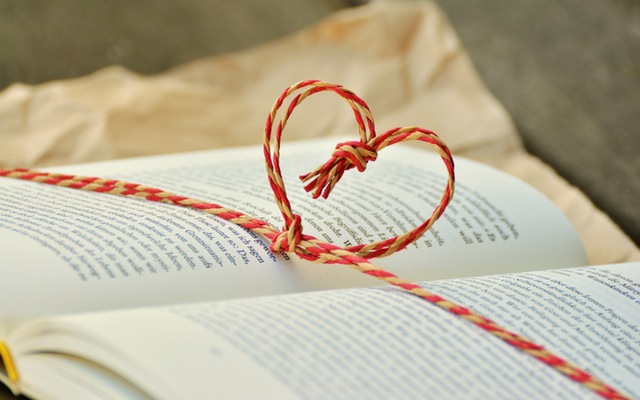 Last night I was photocopying some pages from a book and they were coming out smeared in the center, the words blurry and hard to decipher. I tried turning the book in all different directions but still, the copy was blurry. It wasn’t until I pressed hard on the book’s spine, the book’s center, that the book lay flat and copied clearly.

This got me to thinking how sometimes this is how it is with certain things in our life—we have to press really hard into the center, Jesus, for guidance or discernment into a situation.

Because sometimes He speaks in a still, small voice—like that quiet teacher who somehow commands a classroom without raising her voice, whose words we don’t want to miss so we crane our necks and ears to listen with intention.

So I know in this blog I advocate that dating can be healthy, and I truly believe this, especially for those of us who fall hard and quickly—see my blog post “Dating Is Not Un-Christian.” But this doesn’t mean it can’t get a little messy and confusing. Matters of the heart are never just pure logic, even if you’re seeking God’s will and walking as best you can with Him.

In fact, trying to walk God’s will in any part of your life doesn’t mean it’s going to be without bumps.

So late last winter, my heart was tired. Hurt. Like someone had beat it up a good bit. And while I knew God was on this journey with me, that my experiences were not just for me but to eventually share with others, I was still tired. And so I told God I needed a break. I took a recovery “surrender” chip to let go of love and recommit to giving Him COMPLETE reign over this area of my life.

You see, as time went on these past few years, I was starting to go on dates with “Christian” men after years of dating ones who didn’t understand my faith and thus didn’t fully understand me because my relationship with Jesus influenced all aspects of my life. He was the center. So as I began to date men who shared my faith, that added a whole other layer of trying not to fall too fast or hold on too tight because I hadn’t even believed it was possible to date someone who shared this with me!!!

So here I was, in the late winter, after what seemed rejection after rejection. There had been someone in the fall I had been interested in a long while, someone with whom I had a perfect first date, peaceful and easy, but after the third one, he fell off the face of the planet yet still appeared every now and again. In the summer before him, there had been this other guy whom I messaged long messages with and talked on the phone with and started making plans in my head with until he decided to up and leave for another country but then actually started dating another girl before he left. Then there was the guy who swept me off my feet on our first date—with flowers and wine and steak and frozen yogurt and gifts and how he was gonna take me to meet his family and how he couldn’t wait. I drove home listening to the Sleepless in Seattle soundtrack in a dreamlike state. He was an inspirational speaker, and for the weeks we chatted, I made all these big plans and changes, caught up in his spell of positivity and charm. Until he said work was too much, he had no time for a relationship, and then weeks later was with another girl. And then the other-country guy came back, we talked, he apologized, and we met in person. And he was great. But then he decided he was moving back to the other country. This is just a glimpse into the journey of the past few years. And to be clear, I was not going on dates with these guys at the same time. But it was like a roulette of guys, now Christian guys, coming in and out of my life, teaching me lessons, teaching me that my only true constant, the one who had to be my first love, was Jesus.

It didn’t mean my heart didn’t take a beating.

In fact, God was also using this experience to unearth some hurt from my childhood, deep stuff that He wanted to heal as well. Stuff that even now, in a committed relationship, is coming up in additional layers. But God is my healer.

Anyways, I took my recovery chip and yet I still wondered. Wondered about one of these guys. His falling off the face of the earth frustrated me. Our awkward last date embarrassed me. My trying to take things slow, perhaps too slow that I didn’t say the things I needed to say, bothered me.

There was no closure.

And so I thought about this person a lot. Prayed about him. Pressed into God about him. And every time I thought about reaching out, a very still, small voice stopped me. It said, “wait.” Something kept me from sending the message, from sending the text. And then I woke up one morning knowing the exact five things I wanted to say to him. And should I send them? I pressed in, prayed all morning, and again, something kept me from pressing send. I wrote a couple drafts of said message over the next few days and yet I couldn’t send.

But I kept pressing into Jesus through prayer. I believed that this message could change things, would actually “not” scare this guy away as it would have others (oh, was I the queen of “the letter”—cringe), but I just couldn’t do it. I couldn’t send the message.

Something held me back.

Was it fear? Or was it the Holy Spirit?

I now believe it was the latter.

God did answer my persistent prayer to see this person again and say the things on the list that needed to be said. But it was an unexpected encounter. And I didn’t get to say all of the things. And it didn’t go as comfortably as I planned. And it didn’t change things.

I just didn’t say all the things that needed to be said. Our brief, sudden encounter was not the place to truly be myself. I just wanted one coffee date. Just one. Can’t you give me that, Lord???

So I continued to pray. To press in. And I thought of inviting this guy to my small group. But I just couldn’t send the text.

And then one night, a night I just couldn’t stand it anymore, a night I was ready to take the reins on this one, to just finally SEND THE DARN TEXT, I said to God in desperation, “Okay, Jesus, tell me what to do. During this worship song, tell me what to do. Let me hear you. Because if you don’t tell me not to, I’m going to send this text.”

And during the song, in a verrryyy still, quiet voice, I heard:

And later that night, as I was telling this situation to a friend, I noticed a tall, handsome guy standing nearby, and it looked like he was trying not to listen in on our conversation. We exchanged a glance and a smile. I would see this guy a few times in the coming weeks of our small group, and although I thought he was cute, I immediately assumed he was married so stayed away. He just had the look of someone married with a hot wife and 2.5 kids.

But he wasn’t, and God made it abundantly clear, in almost flashing lights, that He was part of THIS, that He was in the center of THIS. And He still is. It doesn’t mean it’s always easy. It doesn’t mean we’re not two imperfect humans finding our way, with hurts and hang-ups and “stuff,” but God is here. He’s with us.

The Lord said, “Go out and stand on the mountain in the presence of the Lord, for the Lord is about to pass by.”

When Elijah heard it, he pulled his cloak over his face and went out and stood at the mouth of the cave.

Then a voice said to him, “What are you doing here, Elijah?”

God cares about your love life. He cares about whom you partner with. That is not a small thing—whom you walk through life with!!! He cares about “the very hairs of your head” (Luke 12:7, NIV). If you invite Jesus in, He will lead you step by step on this journey. He won’t lead you astray. Sometimes, we just have to press in a little more, tune our ears to hear Him. Sometimes, His voice comes in a gentle whisper.

“My sheep listen to my voice; I know them, and they follow me.”

Have a wonderful week!!!