What Brings You Joy? Or How God Restores the Joys of Our Hearts in His Perfect Timing 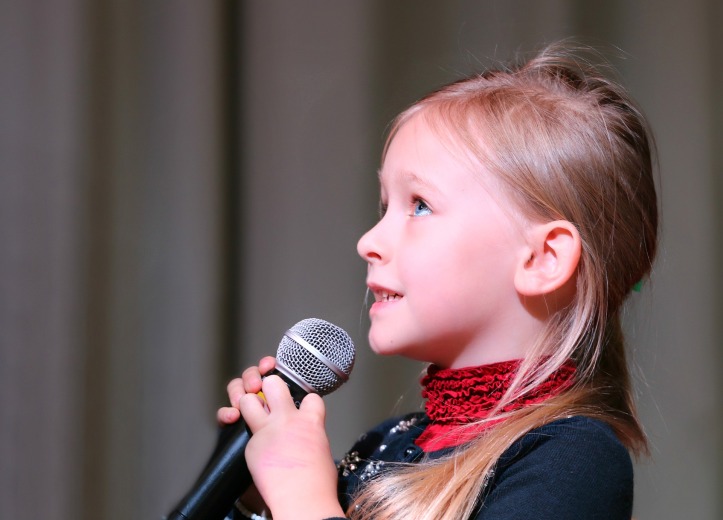 What brings you joy? What activities make your heart sing?

For me, singing makes my heart sing.

Last night was one of the most special nights of my life. To me, it’s proof of God’s perfect timing.

You see, music is special to me. It’s been special since I was a little girl putting her pink tape recorder in the window and singing and dancing to Debbie Gibson and the Bangles. Since I begged my late father to sing me goodnight songs with his guitar. Since I found that singing solos gave me a way to have a voice when it seemed every other moment I was quiet and shy.

God had me die to singing for a season because it became too much my identity; He wanted me to learn my worth didn’t reside in how well I did in a performance. So I sat on the sidelines for a while.

Then I joined a worship team a little over 10 years ago and found that God could use my gifts for Him. He showed me that when I opened myself up to be used by the Holy Spirit, my gift could break chains. I saw worship break out in a powerful way when I obeyed and trusted His leading.

Then my dad passed away, and I moved back home to Pennsylvania. Shuffling from place to place searching for a job and sleeping under my family’s and friends’ roofs didn’t allow me to really plant myself. Then, when I finally did find a job and could set down some roots, I found myself holding onto a relationship that was very clearly not God’s best for me. I stopped going to church regularly. When I found the courage to put on a worship song and sing for my boyfriend, he cringed. My light dwindled.

When he and I broke up, I was heartbroken. A friend sent me a link to a song by Plumb called “Need You Now,” and I listened to it on replay. Over and over. It was a strength.

After the breakup, I took a trip to North Carolina to see my friends, and the joy and peace and sense of “home” I felt there led me to start making plans to go back. And God confirmed that He was in this through Joshua 1:9, which showed up at every turn to let me know that despite my fears of disappointing others or moving away from family, I was going where He was leading.

“Have I not commanded you? Be strong and courageous. Do not be afraid; do not be discouraged, for the Lord your God will be with you wherever you go.”

So flash forward to living in North Carolina and tiptoeing back into church after years of sporadic attendance. And trying to get involved in one church’s worship team but finding it to be a lot of hoops that felt too complicated for my non-techie mind. And then finally finding myself in a relationship with a man who shared my passion for Christ and who treasured me but finding it difficult to sing in front of him. I longed in my heart to use my gifts again, and I longed so much to be able to show my partner this side of myself. I wanted to be “seen.” I no longer wanted to impress anyone but Jesus and the man He had placed in my life. But every time I tried to sing for Justin, my heart beat rapidly, and I stumbled over the words. I even tried to plan a Valentine’s Day song for him on a local church stage, but it didn’t come together. I wrote him an IOU for a future performance to be determined.

A friend asked me how I could find it more difficult to sing in my living room than on a stage behind a microphone. For me, it’s not about the performance or the applause; it’s about the full expression you can give when you’re up there. You can sing with full voice and passion. I can express my whole heart through a song.

So when the small group at the church I now attend started a worship team, I secretly longed in my heart to be invited to be a part. While I am a definite go-getter, even if shy, for some reason, in this, I wanted to be asked. And just a few days after realizing on a deep level that I needed music back into my life, that it was a part of who I am, that I was done being hidden under a bushel, I was asked.

And when I received the set list, one of the songs was the Plumb song. And when I told the group my connection with the song, they let me, a newbie, take the lead on the song. And I, a person who is pretty much an open book, treasured this day in my heart, not telling many people and only asking for general prayer on Facebook. (Not a minute later, Joshua 1:9 popped up on the screen.) While I know not every night of singing will be perfect, and worship is not about me but God and leading others into His presence, I wanted this night to be special. This song meant so much to me. My guy was going to be there. For over a year I had waited for this moment. God knew the desires of my heart. I didn’t even drink coffee in the afternoon, which was serious stuff. Gotta get those vocal chords prepped! (I did take a nap, though.)

And on the night of worship, last night, a minute before starting, the worship leader, whom I barely know at this point, wanted to give me something. It was a homemade Bible-verse magnet his son had colored that said:

“Be strong and courageous. Do not be afraid … for the Lord Your God goes with you.”

I could say so much more, but I will just say that God answered the desires of my heart in such a beautiful way, full of love and an additional special guest and His presence all around.

It was worth the wait.

God hears the desires of our hearts.

P.S. So as I was writing this, the friend who shared this song with me years ago posted on my Facebook wall that she was missing me. I had planned on telling her about singing this song sometime in the next few days, but I hadn’t yet. She had no idea I sang it this night; it had been a good number of months since we talked.

Hope you have a wonderful rest of the week!

Merry Christmas! You are unconditionally loved by the Savior of the Universe! 🎄🙏❤️
#Repost @lisabevere with @get_repost ・・・ I know praying, “GOD USE ME.” sounds spiritual, but it certainly is not scriptural. Healthy fathers don’t USE their children. That’s called abuse. Therefore our Heavenly Father isn’t interested in using the ones he calls His children. 💕 Our Father loved us, healed us, redeemed us and called us His own BEFORE we did a thing! Who we ARE to God is far more important than what we imagine we could possibly DO FOR HIM. Outside of Him we can do NOTHING! Our call is to KNOW HIM before we make any attempt to make Him known. I minister but I am first & foremost His Daughter! 💗 We are not what we do we are His! Brothers & Sisters, Sons & Daughters, Mothers & Fathers, Grandfathers & Grandmothers, Our Father calls you by name. Get alone with Him. Let Him love you. Let Him heal you. Let Him redeem your past. 💗 #daughter #momto4men #siciliangmama
Do you struggle with anxiety and panic attacks? Read my new blog post at www.datingwithjesus.com. You're not alone. And it doesn’t mean you don’t have enough faith. ❤ #stopthestigma #selfcare #thereishope
New blog post - “Don’t Stay with Someone Because You’re Afraid to Hurt Them” (www.datingwithjesus.com - link in Profile)
Going through papers & just found this prayer scribbled in a random notebook from Feb. 2016. Dating had become messy and confusing - guys ghosting, coming back and leaving again, etc. My heart needed a break and so I laid my love life down on the altar. I know this doesn’t always happen so soon, and Justin and my relationship hasn’t been without bumps and curves, but I ended up learning this handsome guy in my circles who I thought was married (he had that look about him) wasn’t and was interested in me. Our first date would happen 3/24, a month after I penned this prayer. There’s something about letting go and letting God. 💕🙏
I neglected to mention who won the Mother’s Day Mended book giveaway! Congratulations, Amy! I pray this book blesses you as it did me! 😊💕💕#mended #mothersanddaughters #mothersday #bookgiveaway